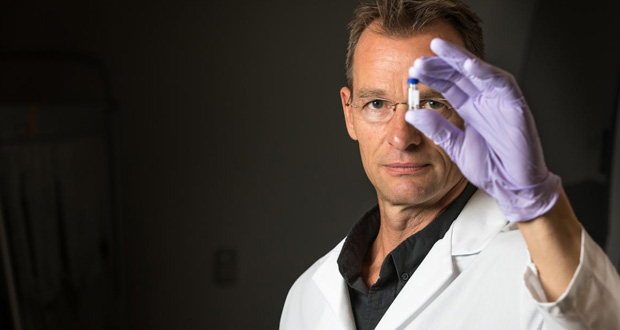 Arizona State University scientist Rolf Halden jokes that his real job is to scare the public, but in the course of his work he has made the public healthier.

Starting at the beginning of September, the Food and Drug Administration will prohibit the sale of personal-care products containing prominent antimicrobials, including triclosan and triclocarban — prized for their antimicrobial properties. The ban is a direct result of Halden’s research, which started in 2002.

“I want to rattle people’s cages to make them aware of what’s happening in our world,” said Halden, director of ASU’s Biodesign Center for Environmental Health Engineering and the lead author of the Florence Statement, a declaration signed by more than 200 scientists and medical professionals that laid out a convincing case against why these two antimicrobials are harmful.

“Oftentimes science is so detailed that the message can easily be lost, so I try to communicate what these things are about and why they’re important. They should be things we care about; otherwise, we shouldn’t be spending tax dollars on them.”

Halden has long contended triclosan and triclocarban are often ineffective in safeguarding the public from harmful microbes and, further, pose significant risks to human health and the environment by contaminating air, soil and water.

The FDA’s ruling only applies to consumer hand washes and soaps. The restriction does not extend to building and household products that are outside the purview of the FDA but still contain hazardous and ineffective antimicrobials sold throughout the U.S. and worldwide. Still, the FDA’s ruling is a major victory for consumers.

ASU Now caught up with Halden before his Aug. 29 Q&A, which will be livestreamed on ASU’s Facebook page starting at 11 a.m. Hosted by Knowledge Enterprise Development, the half-hour session will feature Halden discussing his work and answering audience questions.

Question: You’ve often said it’s your job to scare people. What do you mean by that?

Answer: I want to rattle people’s cages to make them aware of what’s happening in our world. Everything that people encounter on the shelves at the store they believe is safe to use. But if you look at the underpinnings of what products and materials get manufactured into commerce, there are very few safeguards. The thing to remember is that we should never turn off our common sense and we should always ask questions.