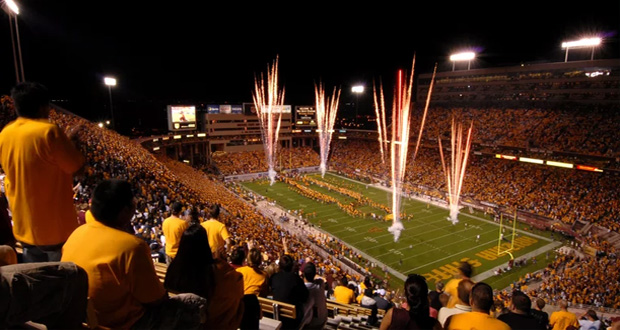 Using forty small, rectangular sensor hubs placed in casings under stadium seats at Sun Devil stadium, Arizona State University was able to turn a jumbotron cliché into a scientific measurement. In 2015, they collected sound data from the crowd using the sensors and represented the information on the scoreboard as a sound meter, said Assistant Vice President of IT Development at ASU Chris Richardson.

The loudest section of fans, as determined by the data, received a push notification from the ASU app on their phones.

“It’s scientific as well as it’s actionable response to those that engaged with the game,” Richardson said.

Intel and ASU created an “Internet of Things” network with the sensors, which analyze humidity, temperature, sound and vibration, among others. Presently, ASU and Intel are planning more deployments of IOT capability.

“It’s really about allowing those things to have a voice such that you can use that information for various needs,” said Christine Boles, Smart Building Solutions General Manager at Intel.

The sound meter that was used in 2015 is the only “full deployment” of the technology so far, according to Boles, but the partnership yields myriad possibilities, including parking improvement and distinguishing “good yelling” from “bad yelling.” As of now, ASU has not created a final list of deployments.

Despite the sound meter being the only implementation, Richardson said the sensor technology creates several possibilities for ASU going forward, including an engaging fan experience, sponsorship opportunities and operational benefits.